The main object in this image is of course the edge-on unbarred spiral galaxy, NGC 891 (a.k.a. Caldwell 23 or Silver Sliver Galaxy), 100 thousand light-years across located 30 million LY away in the constellation Andromeda.  It is a member of the NGC 1023 Group of galaxies which in turn is part of the Virgo Supercluster which the Milky Way is part of.  Larger telescopes do a great job of bringing out the detail in this galaxy, however, the dust lane is well defined even in my image.  Surprisingly this region of space was unknown to me until I saw some really cool images on Astrobin from some of my friends.  The really prominent yellow star in the lower center approximately 3545 LY away is HIP 11185 (apparent magnitude 6.7/absolute magnitude).  It was even more prominent but I toned it down a bit.

I purposely framed it off center as I wanted to show part of the the galaxy cluster Abell 347 located 240 million LY away.  I really wanted to show this object as Abell objects typically are small dinky things too small for my equipment.  The cluster is located in the in the lower right portion of my image and many gorgeous galaxies and interesting looking galaxies which still show some structure even though they 8-times further than NGC 891.  There are numerous other galaxies throughout the entire image and I found myself getting lost trying to spot them.

Imaging this was straight forward and processing went well but would have been easier had it not been for the poor quality of the luminosity data which took quite a bit of extra inventive work.  That was the bad news, the good news is I discovered the cause and fixed it.  Turns out the luminosity filter had something on it.  It was not dust or a typical spot but more of a dendritic pattern in a couple of areas.  Whatever it was came off with the isopropyl alcohol cleaner and the new flats are perfect.  I will keep a close eye on this to see if it happens again but I have been looking to replace my 7nm ZWO 1.25" filter set with the 6 nm Astronomik set or 6.5 nm Optolong set. 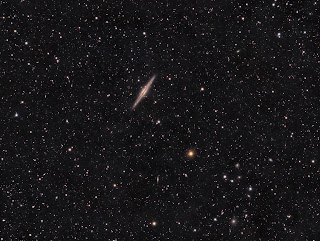 Posted by Kurt Zeppetello at 9:43 PM No comments:

If you are wondering why I imaged the second most photographed galaxy (M33), because it's there.  What I mean is that I have a poor field of view and at that particular time there are not a lot of choices from my location.  I imaged this for couple of hrs. each night while waiting for another target - this is visible for longer periods in my FOV but the other targets are not. The good thing is this is only the third time I have ever imaged it an the first time with the AT115 EDT (115mm refractor) so I was able to get closer in than my previous times with the ED80 (80mm refractor).

M33 or Triangulum is a spiral galaxy and is the third largest member of the Local Group of galaxies, after Andromeda and the Milky Way.  It is located 3 million light-years from Earth in the Triangulum Constellation and can be seen with the naked eye in dark locations.  Triangulum is moving towards Andromeda and studies from 2005 and 2011 suggest that it may have interacted with Andromeda in the past.  Several regions contain star-forming HII nebula some of which are visible in my image.  One of the largest Ha regions in the Local Group of galaxies, NGC 604, is found in Triangulum.  It is estimated to be 1500 light-years across making it 40 times larger than the visible portion of Orion.  On my image it is the large red area to the left of the core in one of the main arms.  Hubble has a detailed image of NGC 604 (https://apod.nasa.gov/apod/ap121211.html) and surprisingly some the detail is visible on my image closeup.

I like the blue tone this time around more than the magenta tone of my previous images.  Processing was tough mainly due to my luminosity data - captured a lot but I seem to have developed on odd problem recently.  There are two artifacts/regions that the flats do not seem to fix.  I reprocessed the luminosity without the flats and there was no problem.  When I have the camera on live view with the luminosity filter, I notice the darker regions.  I am thinking a couple of spots on the luminosity filter but wonder why without the flats the image was fine?  Oh well, so I spent a lot of time tweaking this layer.

I blended the Ha into the red channel at 50 % with PixelMath although I did try other percentages I did not want to make the Ha region look too harsh - wanted a softer feel.  I blended only the galaxy portion of the Luminosity layer in at 50 % as well - enough to add to the outer reaches but so much that it overexposed the core region. 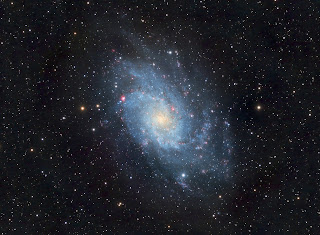 LBN 438 is a dark dusty nebula located in the south part of the constellation Lacerta with many fragments. It is a member of the Lynds Bright Nebula catalog which is ironic considering this object is quite dim.  Various internet sources describe the nebula as being illuminated by interstellar radiation also known as  Extended Red Emission (ERE).  It seems LBN 438 is a part of a much larger molecular cloud complex approximately 1200 light-years away, known as Lacerta 10 and includes Sh2-126 and LBN 437 (not shown - north of my image).
I really like all the gas and dust in the region and it sits in a rich colorful star field.  In addition to the typical reflection from the dust, there is some hydrogen gas in this region and within the nebula itself.  There are numerous small galaxies scattered throughout this image with two prominent ones on the upper left (PGC 69469) and right (PGC 69605).  My favorite is PGC 69469 as the colorful spiral arms are clearly visible.
One of the reasons I imaged this nebula in particular is because I was able to image the Ha when the moon was out.  I have to be very strategic with targets due to a very poor field of view which is why I miss a lot of popular objects.  There are not many images of LBN 438 on Astrobin but it is getting imaged much more frequently now.  I seem to have a couple of small spots on my sensor or glass plate that the flats are not correcting so whenever I get convenient place to break down my set up, a good cleaning is in order.  In the mean time they are easy to fix in post processing.
Blending of the Ha into the RGB image was done first with a 70% Ha and 30% Red replacing the Red channel using PixelMath to make the HaRGB image - other percentages were also tested.  Following this the Luminosity was added to the HaRGB using the LRGB combination.
Dates: 10-30-20, 11-2-20, 11-3-20, 11-4-20, 11-6-20, 11-8-20, 11-9-20 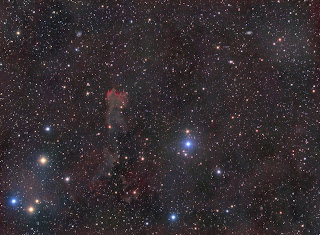 NGC 188 is an open cluster in the constellation Cepheus, very close to Polaris, and is approximately 5400 light-years away.  This is one of the oldest open clusters in the Milky Way at 6.8 billion years and lies far above the galactic plane which has helped it remain intact rather than drift apart like most other clusters.  In addition to the 120 colorful stars that make up this cluster, great amounts of gas and dust are part of it and surround it.  I could have darkened it so most of the gas and dust would not be visible but I really like the dust around this region and plan doing other objects in the vicinity. 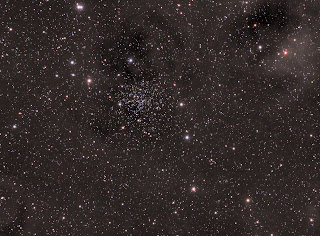 Posted by Kurt Zeppetello at 8:20 PM No comments:

Colorful stars, integrated flux nebulae, and a galaxy, what more can you ask for.  The centerpiece of this image is spiral galaxy  NGC 7497 located approximately 60 million light-years towards Pegasus.  This almost edge-on galaxy stands out well and does show some detail much to my surprise given the size of my scope.  This region also has faint clouds of interstellar dust which ride above the galactic plane and dimly reflect the Milky Way's combined starlight.  These clouds are known has integrated flux nebulae and are commonly associated with molecular clouds.  This region in home to the diffuse molecular cloud MBM 54, less than 1000 light-years years away.  There appears to be other small galaxies scattered throughout this region as well. 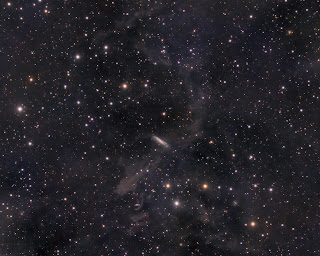 So this is NGC 6823, an open cluster surrounded by a nebula complex (Sh2-86) in the constellation of Vulpecula. The open star cluster is about 50 light years across and lies about 6000 light years away. The center of the cluster formed about two million years ago and is dominated by bright young blue stars.  Also found within the confides of Sh2-86 is the small very bright reflection nebula NGC 6820 which is located in the lower right portion of the larger nebula.  There is a long trunk-like pillar of gas and dust emanating from outer region protruding  towards the star cluster that is a highlight of this region.  The huge pillar is believed to be shaped by the erosion from hot radiation emitted from the star cluster. Numerous dark globules of gas and dust are also visible across throughout this region.

So this is the third time I have imaged this object and not surprisingly this time of year.  The first time was three years ago with my old setup using a UHC filter (https://www.astrobin.com/309164/).  The second time was an HaRGB image (https://www.astrobin.com/365596/?image_list_page=4&nc=&nce=) from two years ago soon after I got the ASI1600 but still using the Orion ED80.  This time I went all out with Hydrogen, Oxygen, and Sulfur filters.  I captured RGB data for the stars and merged them into the the starless narrowband version produced using StarNet++.  Fortunately this is much more detailed than either of my previous images, especially from the 2017 version.  I am always surprised how the colors from narrowband images end up looking.  I let the detail guide me on how to adjust the colors and this is what I ended up with.  I probably could have forced it to a more common blue hue with heavy processing but this is sort of growing on me and I have seen other images with similar colors.
Dates: 9-20-20, 9-21-20, 9-22-20, 9-23-20, 9-24-20, 9-28-20, 9-30-20
https://kurtzeppetello.smugmug.com/
http://astroquest1.blogspot.com/
http://youtube.com/c/AstroQuest1 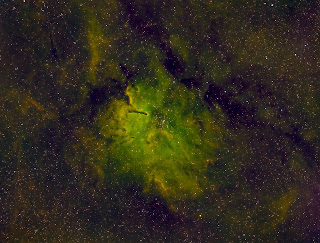 Sharpless 101 (Sh2-101) also known as the Tulip Nebula is yet another gem found in Cygnus located about 8,000 light years.  Stewart Sharpless cataloged this Ha region in his 1959 catalog of Ha emission nebula.  Located near the center of the nebula are two bright yellow stars and a very bright blue-white star called HDE 227018.   This area is also home to Cygnus X-1, a microquasar which is the bright star half the distance from the nebula to the edge of the right side of the image.  This is one of the most intense X-ray sources measurable from Earth, probably attributable to the presence of a black hole.
I have seen many incredible SHO image of this recently so me trying to be different did in Ha and OIII.  I might have picked up more detail with sulfur but I did get a lot of detail in the nebula itself.  This image also is far superior from the image I took of back in 2018.  It was one of the last images I did with my old setup (Orion ED80 and modified Canon T3i/600D).
Imaging this time was very difficult and I had to toss 2 or 3 days worth of data due to the western forest fires.  I thought I had decent data but the skies were too cruddy and so after examining the subframes closely I saw that they were very poor.
Dates: 9-11-20, 9-12-20, 9-14-20, 9-15-20, 9-16-20, 9-18-20, 9-19-20, 9-18-20
https://kurtzeppetello.smugmug.com/
http://astroquest1.blogspot.com/
http://youtube.com/c/AstroQuest1 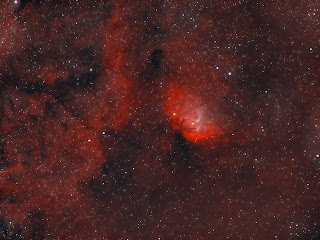 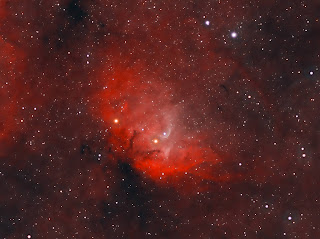 Posted by Kurt Zeppetello at 8:19 PM No comments: